Our next rower. Let’s call her Helen. She’s a very good sculler. Her blade placement is exemplary. She has a smooth stroke and good boat handling. 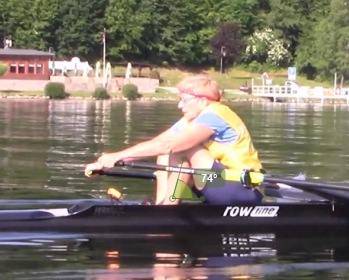 We identified two points for Helen to work on. The first one is something that we currently don’t have sensors for. You can see it from the picture though. She has to relax the shoulders a bit around the catch.

The second point is about catch angle. As you can see in the still, her shins are not perpendicular to the boat. (This picture was taken on day three, when she already improved a lot, compared to day 1.) She can actually reach a bit further, and the thing that is holding her back is insecurity.

The tool we used was simply to install an Empower Oarlock and set the SpeedCoach to show catch angle. Helen would monitor the numbers and it would give her a target to work to, and motivation to try and improve the numbers. It’s extremely simple, but being able to see how far you are catching and pushing yourself to go further in small steps really helps. So this is a technique improvement where the Empower Oarlock really shines.

Rowers come in different sizes, ages and ability levels, and we were conscious of that when we were comparing numbers. With that disclaimer out of the way, there is a lot of value in just looking at numbers side by side and discussing why there are differences. We’ll focus on drive length, as it is one of the primary drivers of boat speed. We’ll also look at catch and finish angle, as it is something that is easily adjusted. 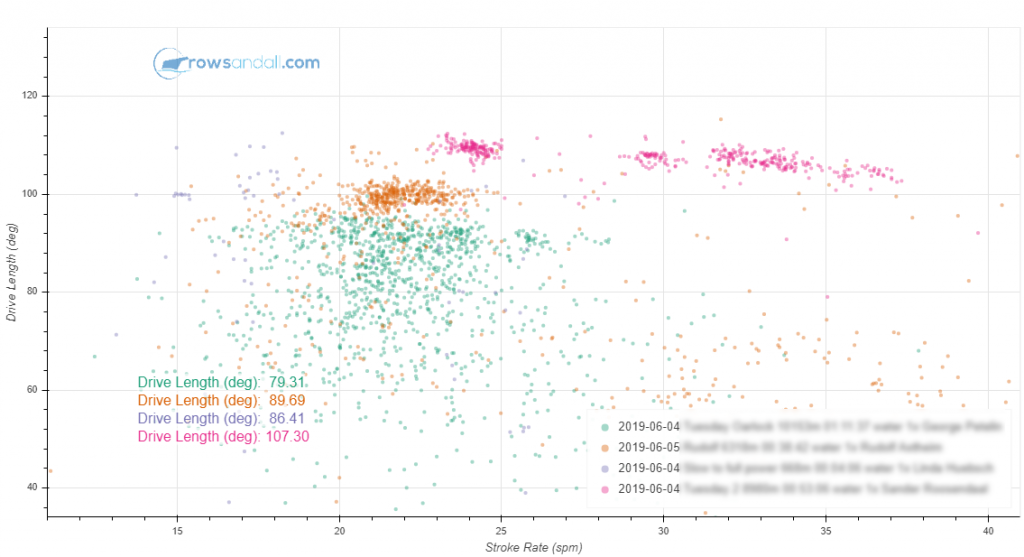 In the chart above, we are looking at drive length across stroke rates for four of our participants. We can see a couple of things. Mr Purple has the longest drive length, and it is pretty constant across the stroke rates sampled. Mr Orange follows.  He is a bit shorter than Mr Purple. Green and blue are very inconsistent.

The next chart shows drive length and catch angle. The two metrics are strongly correlated of course, but you can see that Mr Orange is on a different curve than Mr Green and Mr Purple. This is related to footstretcher position, which we did end up changing a bit for Mr Orange. 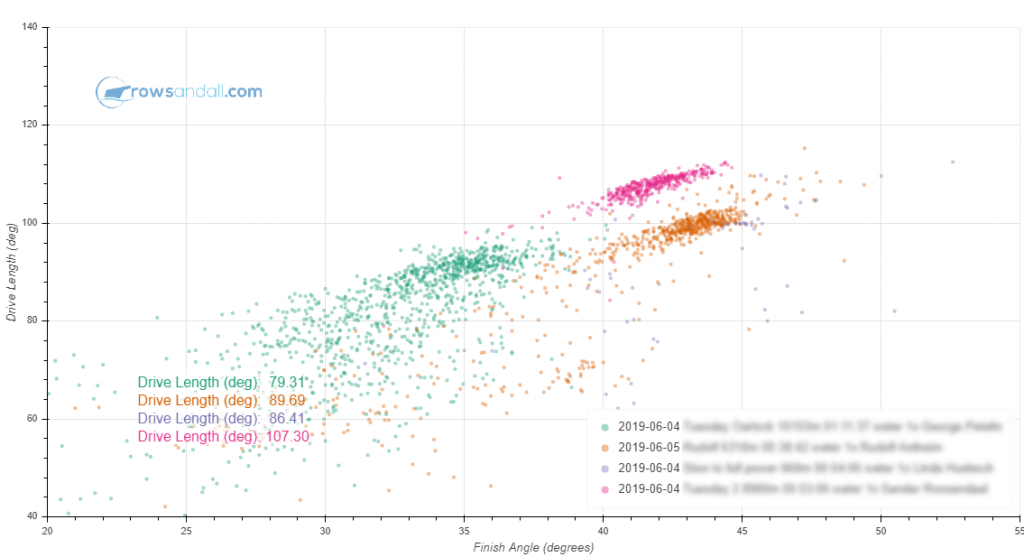 The  same set of data, but now looking at finish angle. Mr Green is short, but he is on the same curve as Mr Purple. Mr Orange has a different footstretcher setting.

A third view on the same data set. Now we’re looking at the peak force angle, which we ended up moving a bit more in front of the pin after analyzing these data.

At the camp, we also went through some other metrics. Comparing rowers and discussing the values of different metrics is a great way to add some facts to your thinking about your boat setup. It forces you to articulate why you made certain choices, and opens your mind for the possibility to change.

Just knowing what the value is of the catch angle, how consistent it is, and how much you can improve can be enough to point a rower in the right direction and get them to improve.

This is the final article about the rowing camp. We have done much more than can be described in three short articles, but I hope you get the idea of how much can be achieved. In a relatively short time, we were able to get people comfortable using the rowing data and making real progress.

For me personally, there were a few important things I took out of the camp:

The camp participants should all be proud of what they achieved. They all worked very hard. Here’s what I think is most valuable for this group:

Any technique change takes tens of thousands of strokes to really settle in, but the first few thousand strokes were done during the camp and I am happy to say that the participants  were very focused, and managed to make some real improvements.

On top of that, we made new friends, had a lot of fun together and enjoyed beautiful weather, good food, Czech beer and Moravian wines.