Drive and Recovery, and Boat Checking

The opposite being the bang and hang which only leads to a slower boat. You don’t want to bang otherwise you can’t hang. Banging means hitting  the catch too hard or tensing or jamming it off the front.”

Here is one of our participants, let’s call him Bob:

This video was taken on the third day. Bob is an experienced sculler, but hadn’t had the opportunity to scull in more than a year. It’s remarkable how quickly he recovered his technique, he made great progress during the week. On the first day, we pointed out that he was “skying” in blades on recovery and missing water at the catch. By the third day, he had made fantastic improvements.

When Bob didn’t have access to water, he spent a lot of time on the bike. Over that time, his legs got a lot stronger and his core and upper body didn’t. Our coach Adam felt that improvement in Bob’s core strength could help him unlock a lot of speed. In the gym, we demonstrated a strength program that should help him develop a lot more “boat send” in the second half of the drive.

The other thing that is slowing Bob down is boat stopping around the catch. He bangs, then hangs, to speak with Robbie Manson.

The charts shows boat acceleration (solid lines) and boat velocity (dashed lines) for four different outings. All four measurements were at 22 spm. The catch is at the left edge of the chart. We’re looking at boat acceleration. Here are a couple of points:

he Quiske app enabled us to compare how rowers with different techniques drove the boat acceleration and velocity through the stroke.

Bob (blue) and Alex (green), are rowing at the same stroke rate.

The Quiske app and RowP pod enabled us to also understand and work on the how our rowers were controlling their oars during both the drive and recovery phase of the stroke. There are a couple of important things that we were able to see from this view.

This chart is one of oar angle speed, again comparing Bob in blue with Alex in green. Two points:

The interesting thing here is that these points were hard to spot on the video, but once we had looked at the data, we were able to spot it by looking at Bob row. By using video, data feedback and live coaching, Bob was able to see and understand the specific elements of his stroke that could be improved.

During the camp, Bob focused on:

Back to the boat acceleration and boat speed curves. The red curve was measured later in the week. Bob managed to change the profile and his boat speed increased, in identical (wind still) circumstances.

Notice that there is a much smaller plateau in the acceleration curve at the catch and the depth of the velocity dip is smaller. Also notice that he has started to minimize the initial peak in the acceleration curve, which means he was applying his leg power more smoothly in the drive. He still has work to do to improve his approach to the catch during recovery, because the acceleration still shows a hump at the right edge. But using the Quiske pod and app we were able to detect the effect, break it down into what’s causing it, and give him a tool to monitor it during subsequent outings.

Here is a second case study from the camp. Let’s call him Arnold. The video was taken on the last day of the camp, and by then he had made some significant improvements.

Arnold has a smooth catch. Very smooth. Arnold hangs, but there isn’t much bang. That was his first priority in camp.

The second thing Arnold was working on was a strong position at the finish. He tends to look into the boat, and could lay back a bit more, especially with his upper back, lower back angle looks okay. Basically, he wanted to have a stronger second half of the drive, combined with a  more dynamic recovery.

In Bob’s case, some of the improvements in technique require work in the gym to help his core and upper body “catch up” with his strong legs. In Arnold’s case, his leg strength, core and upper body are pretty well matched and the recommended changes to Arnold’s technique could be tried right away during camp. Making sure that the new habits stick will be a matter of monitoring. 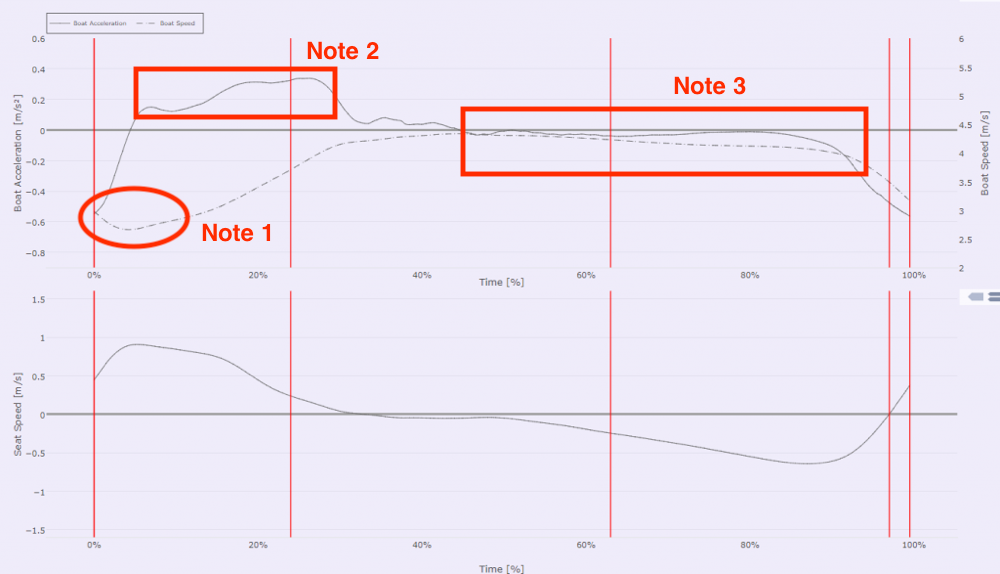 The chart above shows Arnold’s boat acceleration, boat speed, and seat speed at 24 strokes per minute. Again, the catch is at the left edge of the plot.

Arnold gets good blade placement at the catch and quickly starts to accelerate the boat. Bob misses some water, so the boat velocity dips lower, and starts to climb later in the drive. In the recovery, you can see Bob accelerating in the second half of the recovery. So, even though both rowers reached almost exactly the same peak acceleration, Arnold is going faster.

Now let’s compare Arnold and Alex rowing a 500m piece at full power and race rate, side by side during the last day of camp. They were well matched in boat speed. Using Quiske, we can compare their technique under race conditions.

Alex is the blue and red traces. Arnold is the green and cyan traces. At 30 SPM, you would expect that to see more of a dip after the initial leg drive, and more of an acceleration at the end of the recovery and both rowers show that. But you can also see some interesting differences.

After the row, we compared EmPower data between Alex and Arnold and during this piece they were generating almost identical power. Arnold made great improvements over the duration of the camp and the proof is in the data.

This article showed how we used the Quiske app and RowP pod to look at the details of stroke dynamics for three different rowers. Using Quiske helped us discover an aspect of Bob’s rowing that we missed on the water and even later, looking at the video, but once we had identified it we went back to video and data to work on it. From data to insight in one morning!

Arnold’s data shows great evidence of the improvement. Inspecting a video stream is always a little subjective, but having having the tools to see a great build of acceleration at 30 SPM showed that Arnold had quickly mastered his improved stroke. Seeing the data was a great motivation.

We are organizing a similar camp in September, and we still have place for a few more rowers. Check the details on https://pryglrowing.com