15
- December
2018
Posted By : Gregory Smith
No Comments
Using Quiske to work technique on the erg

Late this fall, the nice folks at Quiske released the iOS version of their app.  Quiske offers a little pod that you can strap to an oar or the seat and it will make real time measurements that you can view in the boat and also analyze later.

Sander has written about the Quiske pod before for OTW rowing.  (here)

I wrote a bit about my trial run (here)

I had a chance to try out the pod on the water a few times before I ran out of season, but unlike most other rowing tools, quiske can be used both on the water and on the erg.

Last winter I worked really hard to fix a technical issue that I had with the sequence of my recovery.  My coach (Marlene Royle) provided really valuable feedback that I was breaking my knees well before my arms were extended and before my body was over.  I did drills and worked very hard to try to fix my problem, but it was very easy to slip back into old habits.  I found myself wishing that I had a way to provide real time feedback on my technique.  Some folks set up a mirror and try to watch themselves.  I’ve done this some times, but it’s tough to get a mirror big enough, and frankly, I’m not nearly attractive enough to watch for an extended period of time.

I’ve made a fair amount of progress on  this, but I wanted to see if the Quiske pod would be useful for providing this kind of feedback.

Using Quiske on an Erg

There are two screens you can use on the erg, one is a graphical coaching screen, where you try to get all the “lights green” by rowing with what the quiske folks think is good style.  The other screen is a real time plot of seat and handle velocity.

So, let start by looking at some bad rowing!  I purposely tried to duplicate the way that I was rowing last year, breaking my knees early.  Here’s a video of it.

And here is what the seat and handle velocity looks like.

The squiggly lines make sense, the handle is just about always in motion, except when it changes direction at the catch and finish.  The seat should be stationary during the “arms” and “body” part of the stroke.

Here’s a version that is annotated with the parts of the stroke.

Notice how short the plateau is where the “body / arms recovery” happens?  Here’s a illustration of what the stroke looks like with the graph. 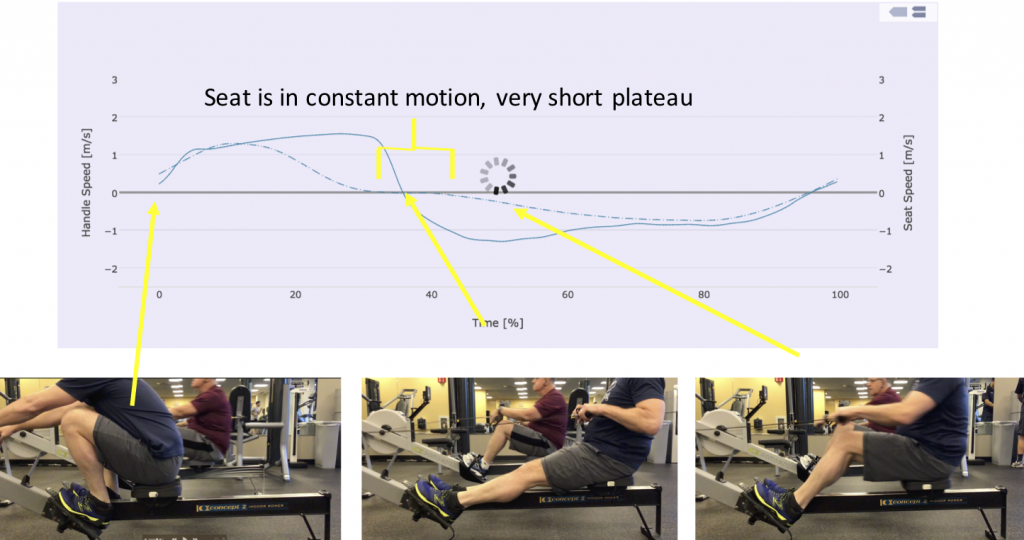 Then I cleaned up my act, and I went back to rowing the way I do now.  I wanted to see if I could see a difference in the plot on the screen.  I definitely could.  As I worked on holding my knees down, getting my arms out and rocking over, I could see the plateau extending on the real time display.

Here’s a video of my rowing with a more normal style.

And here is the resulting plot from Quiske.

I am delighted with this.  I don’t think I would row like this all the time, but I think doing 10 minutes of very concentrated technique work a few times a week using real time feedback would be an incredibly valuable tool for a rower trying to fix a specific issue.  I think other issues would be visible in the plots.

Quiske is available for both iOS and Android.