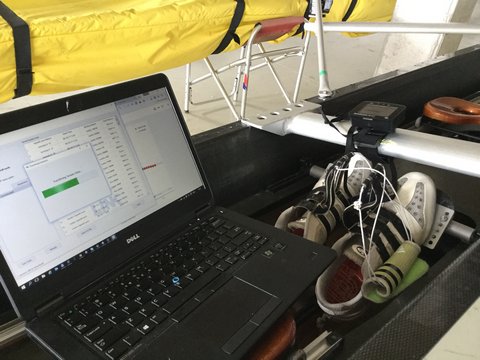 I tested the NK Empower Oarlock / NK SpeedCoach / Rowsandall.com (coach mode) combination to support Juniors girls trials in Račice. Despite some issues we were able to get useful data. We identified some points for improvement, and we learned how to prepare such trials well. The rowsandall.com site is a great help to organize and compare the data collected, both during on the trial day and afterwards.

On Sunday June 18th, I got up very early, because I was expected to be in Račiceat 7:30.

I arrived exactly at 7:30. So what was the deal? I had talked about rowsandall.com to some guys at the Czech Rowing Association, and they were interested to try out a set of NK Empower Oarlocks that had recently been purchased by the Labe Rowing Academy in Racice, and asked me to support. The occasion was the Junior’s trials weekend, and we would trial with the Juniors girls.

These girls had done 2k erg testing on Friday, and raced in small boats (singles and pairs) on Saturday. As a result of that, 8 girls were selected for the sweep rowing squad, and 8 girls were selected for the sculling squad. Let’s focus on the sweep girls, because those were the ones I was helping. This Sunday was a day of seat racing. There were 2 coxless fours, and these boats would race against each other a few times during Sunday, in different combinations. One of the boats, an Empacher 4-, was equipped with the Empower Oarlocks.

So yes, it was equipped. I was a bit nervous about that, because I had given instructions by email, with references to NK’s excellent instruction videos, but I couldn’t assist in the installation and calibration myself, and I was hoping that everything was done well.

Everything was not done well. First, I checked if the SpeedCoaches paired well and were assigned the correct seat. All was well. But when I took a closer look at the boat, I noticed that the magnets were mounted the wrong way (with the “bow” text facing sternwards). The problem was really a language problem. The guy who had done the installation didn’t understand the English manual very well, and he had basically done what he thought needed to be done. So I called him to the boat to start turning around the magnets and probed a bit further. Yes, he had done angle calibration, but when I asked further, I discovered he had only done the zero force and zero angle calibration, but skipped the complete angle calibration (with the calibration tool). As we had turned the magnets, we had to do all the calibrations again, anyway.

There was a slight problem, though: It was 10 minutes before the girls had to get on the water for their first seat race.

We managed to completely calibrate four sweep oarlocks in 15 minutes. But when the girls were carrying the boat to the dock, I wasn’t 100% sure that they everything was all right. While the girls were out rowing, I set myself up in a corner of the National Boat House (lots of concrete, lots of yellow, see picture above) and prepared for the data analysis. I created a Coach account with a team called “Juniorky”, and I created eight normal accounts, one for each of the girls, and allocated them to the “Juniorky” team. About an hour later, the girls returned. I booted up the NK LiNK app and started downloading data from the SpeedCoaches. In the process, I named each SpeedCoach according to the seat position. All the while the coaches were looking over my shoulder, curious to see what I would find.

When you have to get the data from four SpeedCoaches and export them to CSV, the slowness of the LiNK software starts to be annoying. The entire process of transferring the data of four SpeedCoaches takes about 15 minutes. When it is done, uploading to rowsandall.com seems to go at light speed. (I have communicated this to NK and they responded that the next update of the LiNK software will be much better in this respect. They even let me try the beta version and, indeed, this issue will be resolved once they release the update to LiNK.)

Finally, I had the first batch of data on the site, but they didn’t show up. The cause was found quickly. The SpeedCoaches were set to a date somewhere in 2013, and to Eastern Standard Time. These were brand new SpeedCoaches, but we had set them up and switched them on inside the boat house, so they started recording before the first GPS fix allowed to set the time.

A further disappointment was that the Stroke seat SpeedCoach had only recorded pace and stroke rate data. Anyway, the coaches and I went through the data of the three remaining girls and I set up “favorite” charts of the charts they were most interested in, which was power and effective stroke length vs time.

There was about two hours time before the second seat race would start, and I used the first hour to set the correct time zone on the SpeedCoaches and basically redo all the calibrations and trying to find out why the stroke seat didn’t record. It paired well with the SpeedCoach, so that wasn’t the issue, but on further inspection I noticed that it gave negative angles at the finish and positive angles at the catch. Checking through the menu I found the reason. The Oarlock was registered as a Starboard one, while it was in fact a Port one. 🙁

I thought I had solved the issue. Time for the second seat race. Unfortunately, after that row, we found out that the Stroke seat SpeedCoach/Empower combo was still misbehaving. No data for stroke seat. When I finally found time to dig through the raw data at home, I found that the stroke seat was still registering as Starboard. I don’t know if it was oversight from my side, or if it was a glitch of this particular SpeedCoach.

With most issues out of the way (except for the stroke seat), I can say that apart from the slow data export from LiNK, the combination with rowsandall.com really worked. We were able to make comparison charts of the data while the coaches still had a fresh memory of the row. We gathered around the computer screen to go through different metrics and discuss what they meant in terms of performance, and how this correlated with what the coaches had seen.

I cannot imagine doing this with excel. The result of the analysis was quite unfortunate for one of the girls who had moved from boat B to “my” boat A. She was lower on power, shorter on the stroke, and less consistent during the row. I felt sorry for her, when we went through the data with the coaches and the data basically confirmed what they had seen from observing the row. The final row that I supported was the one at 4pm. I had given up on data from the Stroke seat oarlock. Here is a picture of my notebook pulling the data after the row: I analysed the final batch with the coaches, who took the info to their meeting to decide if further trials were needed or if they had enough information. I told them that I had to go, and by 5pm I was driving. Arrived home at 8:30pm. It was a long day.

On the Monday I did some deeper analysis and sent a report to Prague. One of the things I did was use the Interval Editor to mark only the 1250m trial as “work” strokes, to make it easy to see the averages in the comparison plots. On the trials day itself, I just opened four browser windows with the flex plot and zoomed in to the 1250m trial using the distance sliders. It turned out to be the fastest way to convey some information to impatient coaches after the long wait for downloading the data. In the next section, I will show a few key charts.

Meanwhile, in the boys seat races, my club mate had saved himself by what the data showed from the Peach system that was mounted on their quad. He had done badly in the single on Saturday, in unfair crosswind conditions, finishing fourth in the B final on a disadvantaged lane, but the Peach system showed that all quads he was in were the fastest and that he was pulling the highest watts in those quads. As a result, he was in, and another club mate who had rowed the single in the A finals, was out. Trials can be dramatic events.

First, just a check chart of the stroke rate vs time. The data should overlap. It seems that not all SpeedCoaches started at exactly the same time. Comparing power. In this chart, we basically looked at the average reported in the bottom left, then checked to see if there were big differences in how the race was rowed, for example if all girls pulled the final sprint. We also looked at differences in drive length and effective length. Both values were of high interest for the coaches. When doing multiple trials on the same day, it is interesting to look at the consistency from trial to trial. With enough attention to the setup and calibration of the boat, the NK Empower Oarlock with NK SpeedCoach can be used very well to support trials. The key is to:

I think the trial day also showed the potential of rowsandall.com for quick in-the-boathouse analysis of a trial that has just happened. However, I would recommend:

My trial day wasn’t 100% successful. The upcoming speed improvement of the LiNK software will be highly valued by data analysts and coaches taking care of big boats. Also, we learned some important lessons on how to prepare for trials, especially in an environment where not everybody speaks English.

Despite the issues, we were able to get some valuable data, and the coaches did use them in addition to what they had seen during the trial rows. The Coach setup of the rowsandall.com site works very well to organize the rows of the athletes in the trial. Having all the information available on a web app makes it very easy to work on the data during the trials, and afterwards and makes you independent of a computer with data analysing software. I did part of the work on my notebook, then used an iPad to show some things to the coaches, and on the next day I did the interval editor work from another computer.